The Garden Becomes a Source of Local Eating: 2008 Garden Update #8 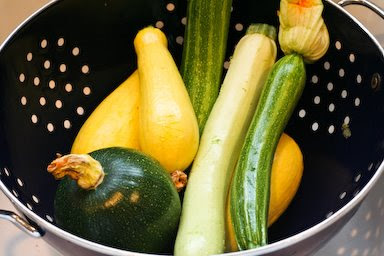 I can hardly believe it’s been a month since my last garden update and I’m thrilled to report that my garden is abundantly producing veggies and herbs. I’ve always had a pretty fertile garden, but the raised beds and compost enriched soil seem to have bumped it up another notch. In the colander above is one day’s picking of squash, which shows you what a challenge it is to use all the produce. Luckily, I have a lot of nice neighbors to give things to! By the way, I’m intrigued by the fact that the pale green zucchini and the striped green zucchini come from two plants that were growing in the same container! 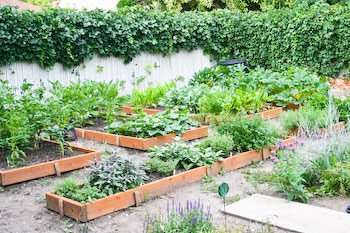 Here’s a current view of the garden space, with two herb beds in the front overflowing with herbs, and the four larger beds in back also completely filled with various veggie plants. 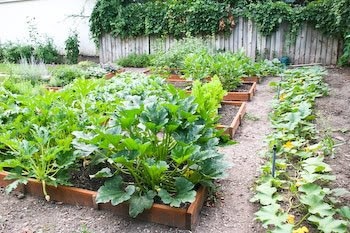 A view looking west-to-east in the garden shows the squash plants up close, and now you can see the really big squash (butternut) that’s growing along the back fence. 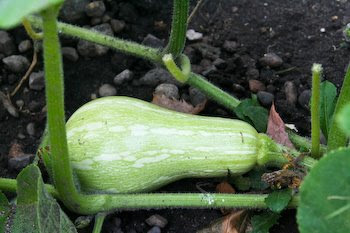 This is the largest Really Big Squash, a hybrid variety of butternut that produces a lot of squash, and each one is (you guessed it) really big. Last year I had lots of these that were over a foot long. 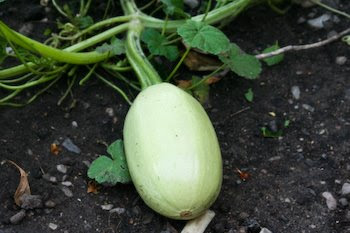 At the east end of my raised beds, I also have spaghetti squash growing next to the beds. This is the biggest spaghetti squash so far, about 6 inches long. By the way, did you know you can cook spaghetti squash as a summer squash if you pick them when they’re young? That’s definitely my favorite way to eat them. 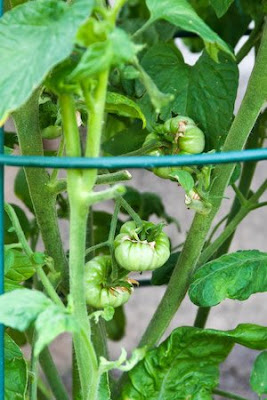 Finally, Brandywine tomatoes on the plants! This is my favorite variety of heirloom tomato, producing huge tomatoes with great flavor. They’re slow to start producing compared to other tomatoes, but worth waiting for. 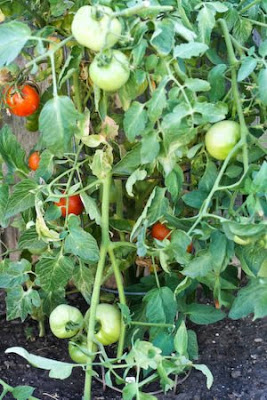 I haven’t had a huge number of ripe tomatoes so far but my old-standby Celebrity tomatoes are producing a few, and I’ve even had a couple of tomato sandwiches. 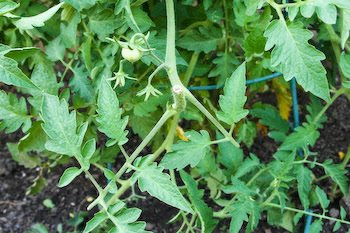 At this time of year, I always start pruning the tomatoes. Like you see in this photo, I cut off the end of the stems, just after a clump of tomatoes. Some tomatoes need pruning more than others, but I think this makes the tomatoes on the plant grow bigger and ripen more quickly. 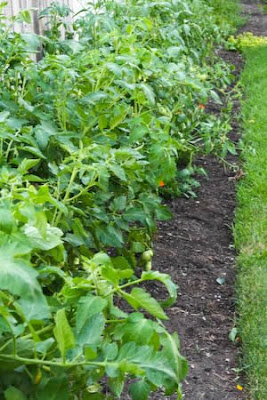 This is the long row of tomatoes along my fence after pruning, so you can see that this was quite a bushy row of tomatoes before they were pruned! If you don’t prune, the indeterminate varieties of tomatoes grow a lot of long stems and leaves and less fruit.

I have loads of tomatillos on my plants now, and I’ve even used a few in some black-bean salsa. I wasn’t sure how to tell when they’re ripe, but I just picked some that had filled out the papery skin, and they were great. 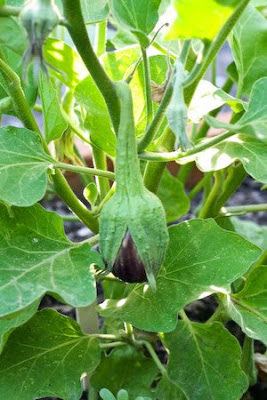 I have both white and purple eggplant in one of the raised beds, and they’re finally starting to produce some eggplant! I’m really looking forward to making Spicy Grilled Eggplant again this year. 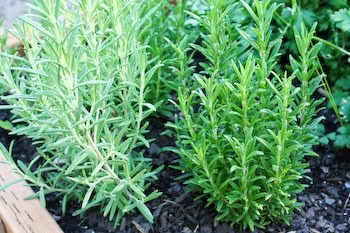 I had two rosemary plants, and then decided I needed one more plant (silly me!) Now there are two distinct colors of rosemary, although they seem to smell and taste the same. 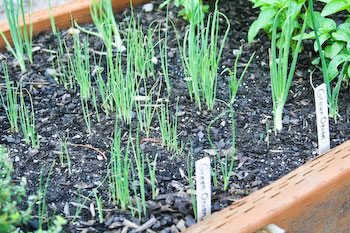 Finally, one of the most exciting new plants this year is green onions! Although they’re slow to grow big enough to use, this is something I buy regularly at the store, and I love being able to grow my own.
If you want to check the progress of the garden through the season, use the label 2008 Garden Updates to load all the garden update posts.