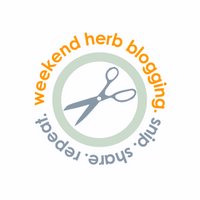 In Salt Lake City we’re having an especially nice weekend, with the weather being in the 50’s, unusual for this time of year. For sure it’s making everyone who loves to garden long for the arrival of spring. One of our local weather forecasters did some comparing of temperatures and calculated that if you label *winter* the coldest three months of the year based on average Utah temperatures, the first day of spring here would actually be February 21. I love hearing that warmer weather is on the way. In other places, lots of people are growing interesting herbs, plants, veggies and flowers and sharing them for Weekend Herb Blogging. It’s great seeing the photos of things growing in other parts of the world that my herb blogging friends send me. But even when you have to buy your plant foods, it’s fun learning about new herbs and plants together. Let’s see what people have been blogging about this week.

This week at The Cooking Adventures of Chef Paz, Paz is making a delightful sounding Tandoori chicken, a dish I’ve always wanted to try cooking myself. Paz garnishes her chicken with red onion, lemon, cilantro and tomatoes.

Barbara from Tigers and Strawberries tells us about curry leaves or Kadhi Patta, from the plant called Murraya Koenigii. The leaves are used in India to flavor many foods including dal, eggplant, and potatoes, and Barbara uses them in her Curry Leaf and Ginger chicken.

Sicilian Oregano, originally brought to the U.S. by a friend of her grandmother but now growing wild, is the plant that was featured this week by B’gina from Stalking the Waiter. B’gina also shares a fantastic sounding recipe for Vera Cruz Style Tomato Sauce which includes tomatoes, onion, garlic, oregano, capers, and green olives, and is which she uses on fish or chicken thighs.

At Green Olive Tree, Kel has been infatuated with pumpkin, which she buys in slices from her green grocer. For this week, she uses the pumpkin to make Spicy Thai Pumpkin Soup, flavored with wonderful sounding things like garlic, shallots, dried shrimp, red chili peppers, lemongrass, and coconut milk.

In northern Germany, Kuchenlatein is sprouting seeds again, this time the wonderful tasting sesame seeds, which she tell us are a good source of calcium. Bananas are flavored with ginger and honey and then rolled in sprouted sesame seeds to make Sesame Coated Banana, a tasty and nutritious dessert.

Fiber from 28 Cooks has recently catered a pre-wedding cocktail party for a friend, where she served some of her wonderful sounding Hot Pepper and Garlic Jelly. She reports that this is good with cheese, crackers, mixed with cream cheese as a dip, or thinned to use as a glaze.

The Unemployed Cook combines fresh rosemary, sage, lemon zest, garlic, and salt to make a mixture which is dried, then used as a rub on pork Tenderloin “in Crosta”. Marianne roasted the pork inside a French batard, a thicker baguette, and the finished dish sounded amazing.

Sher from What Did You Eat features rosemary this week, used in a recipe from Deborah Madison, Split Pea Soup with Rosemary Croutons. Be sure to click through to see her gorgeous photo of the flowering rosemary bush in her yard.

Ed Charles from Tomato still hasn’t used up all his zucchini, but now he’s wondering about cooking some of a Prickly Pear Cactus that has lost a leaf. Also, be sure to read about Ed’s new blog event, Post and EaT Everything Weekend Lame LeftoverS (Pete Wells), which kicks off March 13. The idea is to use up and post about anything that would ordinary be thrown away.

From the blog Veggie Way, Isil sends us information about Mountain Tea, made from the plant sideritis arguta, which is a member of the mint family. The tea, rich in ethereal oils, is great for sore throats, or simply for helping you relax.

Farmgirl’s Farm, Missouri, U.S.A.
On the farm at Farmgirl Fare, Susan is telling us how she manages to grow and harvest turnips all year round. Don’t miss this if you’re interested in gardening! She also gives some ideas for using every part of the turnip, from the baby bulbs to the greens. 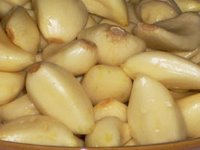 My own herb blogging this week was about garlic, which is technically a spice and not an herb. I gave links to information about the health benefits of garlic, recipes with garlic, and growing garlic, and also shared a recipe for Roasted Broccoli with Garlic.

We are a participant in the Amazon Services LLC Associates Program, an affiliate advertising program designed to provide a means for us to earn fees by linking to Amazon.com and affiliated sites. As an Amazon Associate, I earn from qualifying purchases.
« Previous PostWeekend Herb Blogging #20
The End of a Cheesy Week
Next Post » Chicken Penne Casserole (and Sophie Cooks in Kalyn’s Kitchen)