Weekend Herb Blogging #9 Recap (Get Some Herbs and Cook!)

Yummly
Another great weekend of herby blogging is coming to an end! Time to recap the great posts about plants that people came up with for Weekend Herb Blogging #9. I’m having so much fun seeing where these posts come from that I’m going to start spotlighting the locations at the starting of each recap.
CALIFORNIA, U.S.A. Starting us out this weekend was Brett from In Praise of Sardines. On Thursday he posted his WHB writings about the least popular vegetable. (Gives a whole new meaning to starting the weekend early, doesn’t it?) Early or not, Brett always writes fascinating things about the veggies he picks, and this week was no exception. I won’t reveal what the unpopular vegetable is, except to say that he uses a very interesting cooking method and pairs it with anchovies in a dish that sounds really outstanding.
CALIFORNIA, U.S.A. Next up was Bean Sprout, the Herb Blog Dog, showing the crown of chives that his mistress, CookieCrumb had created. CookieCrumb says she is tired of the flavor of garlic chives, and is off to the garden center to get some new plants. (News flash: Due to the e-mail she sent, I now know CookieCrumb’s real name. Don’t worry CC, even if the U.S. Army tortures me, I promise to never reveal it.)
JERSEY – CHANNEL ISLANDS From a blog called Rice and Noodles, Mae sends us photos of her lemon thyme, rosemary, and bay tree, and great sounding recipes for each, including a recipe for Roast Pork with Garlic and Lemon Thyme that I want to try. Mae has a wonderful new blog header, and a photo to show us how she looks! (Mae, you look great!)
TEXAS, U.S.A. Next from a blog called Heather’s Space we get some photos of begonias. Flowers! Every week I remind people that flowers are acceptable, and Heather is the first one to take me up on it. Heather featured her Looking Glass Begonia in various stages of development, including cuttings she is going to start next spring when it gets above freezing.
NEW YORK CITY, U.S.A. From The Cooking Adventures of Chef Paz we learn about sage, including some information about the history of this wonderfully fragrant plant. Paz also shares a recipe for Breakfast Potatoes with Sage. (Even though they are called breakfast potatoes, Paz reports she enjoyed having them for dinner!)
NEW DELHI, INDIA A fascinating post came from Sury, who writes a blog called (Lima) Beans and Delhi Cha(a)t with her friend Cesarcarlos from LIMA, PERU. Now that you see where the two of them are from, it will help you understand the clever blog name. What a fascinating blog, featuring two cuisines I don’t know much about. Sury writes about ginger, including a recipe for Ginger Pickle in Lime Juice that sounds wonderful.
ANDHRA PRADESH, INDIA From Suilaja at another great Indian blog called Sailu’s Food (Indian Food – Andhra Recipes – Home Remedies – Ayurvedic Cooking) comes a very interesting post about the Indian Gooseberry, also called Amla. This tiny fruit is used in medicines, tonics, and even hair care products, and has many culinary uses as well. Suilaja also shares a delicious sounding recipe for Amla Murabba, a type of spread.
MISSOURI, U.S.A. From her farm in Missouri, Farmgirl shares lots of great information abut Endive and Escarole, including why the two are sometimes confused for each other. She gives tips on how to grow these sharp tasting greens, and confesses that she only recently learned she should be “blanching” them to make them less bitter. Farmgirl promises a great recipe for Escarole tomorrow,so be sure to check back for that. 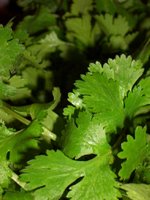 UTAH, U.S.A. My own post this week was about my very favorite herb, cilantro. In years past, when I was catering houseboat trips I learned that it’s the herb that some people completely hate and others (like me) love, love, love. There is no middle ground when it comes to cilantro opinions. I share a recipe for Chicken, Black Bean and Cilantro soup, as well as my failed efforts to grow cilantro in my garden.
That’s it for Weekend Herb Blogging #9. (Do you realize nine weeks is an entire school term? I feel like I should be handing out report cards. Ok, straight A’s for all you great herb bloggers. After all, I’m the teacher and I can give you whatever grades I want!)
After you finish reading the herb posts, check out Weekend Cat Blogging, Weekend Dog Blogging, and Indian Kitchen to see other fun weekend blogging events.

We are a participant in the Amazon Services LLC Associates Program, an affiliate advertising program designed to provide a means for us to earn fees by linking to Amazon.com and affiliated sites. As an Amazon Associate, I earn from qualifying purchases.
« Previous PostHere Comes Weekend Herb Blogging #9 and Check Out All These Great Food Photos
Next Post » Your Blog Reading Assignment: Find Both the Utah Food Bloggers

9 Comments on “Weekend Herb Blogging #9 Recap (Get Some Herbs and Cook!)”