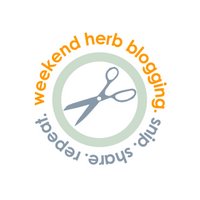 Another weekend, and another great group of herb blogging posts to report on. This weekend I was hoping for spring, and the forsythia buds I saw in my yard were an encouraging sight. But alas, by Sunday it was starting to snow. I figured it would snow again, because Saturday I got all excited and cleaned off my porch, moved the barbecue grill back to its summer location, and even washed off some porch chairs and sat outside enjoying the weather for a while. As I was sitting there, I said to myself, “This can’t last. I have to prepare myself, because it will snow again at least one more time.” At least I got a little taste of summer, and I know the end is in sight.

Starting off the herb blogging this week was Ulrike from Kuchenlatein who was preparing Parsley Potatoes to improve the appetite of her son was has been feeling ill. Ulrike says that parsley is the most important herb in Germany, where it is used in a wide variety of dishes.

At Once Upon a Feast, Ruth and her husband are going on The South Beach Diet. (Allow me to abandon herb blogging for a moment and say that if you’re a South Beach Reader, visit Ruth’s blog to see the great South Beach food she’s been cooking.) For Weekend Herb Blogging, Ruth made a wonderful sounding Balsamic Chicken and Pan Roasted Broccoli with shallots, garlic, and thyme.

In New York, the Chocolate Lady from In Mol Araan tries her hand at making homemade Zata’ar. If you’re not familiar with this middle eastern spice blend, it’s traditionally made with thyme, sesame seeds and sumac, but TCL did not have sumac and substituted amchoor, which is made from dried, powdered unripe mangoes. Sounds great.

Herbed Carrots with Marjoram was the Weekend Herb Blogging recipe for Ramya from Cooking Within My Grasp. Besides the marjoram, the carrots were flavored with ginger, garlic, and paprika, in a recipe that sounded very tasty.

Sury from the interestingly titled blog (Lima) Beans and Delhi Cha(a)t returned to WHB this weekend with a fascinating post about a Bengali dish called beet chops, which is eaten as a snack. If Sury will forgive me for what I’m sure is a very Americanized description, these are mashed potato balls stuffed with a mixure of beets and carrots and then deep fried, and they do look delicious.

Davis, California, U.S.A.
Arugula and Meatball Soup with Pesto is the dish cooking this weekend in the kitchen of Sher from What Did You Eat. The idea of putting a dollop of pesto on top of a soup that contains chicken stock, meatballs, arugula, beans, and pasta sounds just wonderful to me.

Brussels, Belgium
Andreea from Glorious Food and Wine is home from her travels and has been exploring Italian cooking, particularly The Silver Spoon and the recipes of Genarro Contaldo. She uses fresh thyme and sage in her great sounding version of Lemon and Thyme Chicken with Chilli Beans.

Lancaster, Pennsylvania, U.S.A.
The dilemma of what’s for breakfast has been solved by Fiber of 28 Cooks with her recipe for Ginger Carrot Morning Cookies. Loaded with healthy ingredients like whole wheat flour, flax seed, rolled oats, sunflower seeds, and carrots, these sound like a delicious and healthy way to start the day.

California, U.S.A.
Dal Panak, or Spinach Dal with Rice is on the menu for the family of Spicehut from Sugar, Spice, and Everything Nice. I love the way she clarifies what some of the Indian ingredients are for those of us who are just starting to learn about Indian cooking.

South of France near the Spanish Border
My money is on the mint in the garden of Riana from Garlic Breath, where she reports that she is letting her mint, lemon thyme and parsley battle it out. Meanwhile, Riana is inside whipping up a batch of Chocolate Mint Peppermint Cookies. (South Beach Dieters, cover your eyes.)

New Jersey, U.S.A.
Cate from Sweetnicks and Weekend Dog Blogging fame has found a wonderful and easy recipe for Chicken Chilaquiles. Since her version of this dish contains lots of fresh cilantro, which I once declared to be my very favorite herb, I know I would love it. (Cate, hope you’re feeling better.)

St. Louis, Missouri, U.S.A.
Alanna, the Veggie Evangelist from A Veggie Venture, is growing tired of winter veggies and thinking of spring with her Zucchini, Lemon-Honey Salad. The addition of chopped fresh tarragon (which could be replaced with mint if you prefer) makes this salad sound particularly interesting.

Utah, U.S.A.
A first time herb blogger this week is Erin from Erin Eats, the talented cook who made the berry dessert that made Vanessa and I go weak in the knees at the Utah Food Bloggers dinner. Erin reports she is passionate about vanilla beans, which she uses to make vanilla extract, and I’d say this is worth making even if the only thing you used it for was those berries, they were that good!

Melbourne, Australia
The Weekend Grape Glut is weighing on the mind of Ed from Tomato, and he reports sadly that in Australia there are so many grapes that it is cheaper for farmers to leave them on the vines. Ed produces some amazing shots of back-lit grapes, and wonders if he is in a photographic rut, to which I say, absolutely not!

Melbourne, Australia
This is the second time two Melbourne bloggers have managed to synchronize their watches and send their posts right in a row, but maybe it’s just the time difference from Australia to Utah! Plum from My Favorite Plum is finding that it’s suddenly sage at her place, as she cooks with sage twice in a week. She promises she’ll be blogging soon about Italian Porchetta, and includes a great sounding recipe for One Pan Sage-and-Onion Chicken and Sausage.

Knoxville, Tennessee, U.S.A.
Marianne, The Unemployed Cook, is having fun planning her kitchen garden and experimenting with new herbs. This week she is focusing on lemon balm, a member of the mint family, which she uses as one of her ingredients in herbed new potatoes.

Sandy Hook, Connecticut, U.S.A.
Sarah from Cucina Bella admits that she only recently started learning about herbs, and when she picked up some “thyme” for a mussel chowder, she later learned it was rosemary. Not to worry though, because the rosemary was perfect for her recipe of Herby Cheese Mini Foccacia, which she reports was a hit.

Singapore
Migraine headaches have been plaguing Stephanie from Mana Makan – The Feast Crusade, and when she ventured out to look for something healing she noticed an interesting plant called zhen zhu ye or pearl leaf. Stephenie used this to make an interesting sounding Pork Balls with Pearl Leaf Soup, which we hope will help her to make a speedy recovery.

Farmgirl’s Farm, Missouri, U.S.A.
On the farm, Susan is busy starting seeds and putting most of us amateur gardeners to shame with her well organized greenhouse and garden plans. This week she is talking about planting by the moon signs, and has decided it’s time to plant onions, but too early for many other plants.

Texas, U.S.A.
Heather from Heather’s Space is lucky enough to be in a part of the U.S. where she can think about planting things, and this week she has some salad burnett and stevia which are going to be planted soon. Heather, I want a full report on both of these plants once you get them going, since I’ve never grown either and I’m curious about them both. 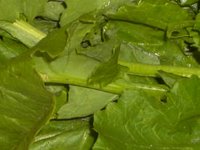 Salt Lake City, Utah, U.S.A.
My own post this week was (finally!) about broccoli rabe, rapini, or rappini, depending on what you prefer to call it. I used it to make Penne with Sausage, Garbanzo Beans and Broccoli Rabe, which was one of the best tasting things I’ve ever eaten.

We are a participant in the Amazon Services LLC Associates Program, an affiliate advertising program designed to provide a means for us to earn fees by linking to Amazon.com and affiliated sites. As an Amazon Associate, I earn from qualifying purchases.
« Previous PostUtah Food Bloggers Come to Dinner!
Next Post » Weekend Herb Blogging #26 Recap
Happy April to Everyone!

11 Comments on “Weekend Herb Blogging #25 Recap and Hoping for Spring!”