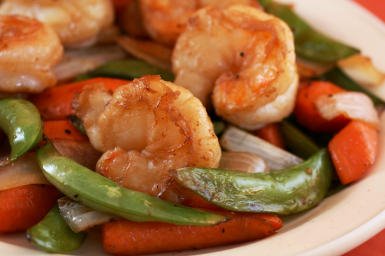 A few days ago I was thinking of something to cook that had carrots in it, partly because I had a new mandoline that was a gift from a student, and I bought some whole carrots to try it out. I looked a few places for ideas, when I saw a good sounding recipe for carrots with an Asian twist on A Veggie Venture. Of course, if you read my blog much you won’t be surprised that I used Alanna’s recipe as an inspiration, but changed the recipe a bit. I ended up with a dish of grilled veggies and shrimp with an Asian style marinade that was a keeper for me.

There are a number of veggies that could be used in this besides the ones I tried. I was planning to add mushrooms, and possibly a yellow pepper from the garden, but I was afraid it would be too much for the pan. Other things that might be good include asparagus, green beans, zucchini, yellow summer squash, or broccoli.

If you have a grill and don’t have one of these wonderful pans with holes that sit on top of the grill, I suggest you invest in one. I discovered them last summer, and now I have three! I use the one in the photo below the most, and it’s the perfect size when you’re cooking for only one or two people.

Soy-Grilled Shrimp with Asian Veggies
(2 servings, recipe by Kalyn with inspiration from A Veggie Venture)

Mix marinade ingredients. Cut carrots in half lengthwise, then slice on the diagonal with mandoline or knife. (Carrots will need more cooking time than the other veggies, so if you don’t like carrots with a bit of crispiness, you should cut them smaller than the other things.) Cut snow peas and sweet onion into same size pieces. (For onion, cut off ends, cut in half lengthwise, then cut onion into “slivers” approximately the size of snow peas.) Measure 2 T of marinade and put into plastic container with a tight lid big enough to hold all the shrimp. Put veggies into zip-loc bag and pour rest of marinade over. Seal bag, and marinate in refrigerator 2 hours or more, as long as all day if desired.
About 30 minutes before cooking, add shrimp to plastic bowl with reserved marinade. Turn bowl over several times so shrimp are well coated with marinade, then put in refrigerator.

Preheat grill to medium-high and put grill pan on the grate directly over burner. Drain veggies, then add to grill pan, keeping a spray bottle handy in case flames shoot up from the oil in the marinade. Grill veggies 10-15 minutes, stirring constantly, until carrots are starting to soften, and other veggies are getting slightly browned on the edges.

When veggies seem nearly done, add shrimp with marinade and grill 4-5 minutes, turning several times with a fork. Be careful not to overcook, shrimp should turn opaque but will be barely browned. Season shrimp and veggies with salt and pepper to taste, and serve immediately.
Printer Friendly Recipe
South Beach Suggestions:
This would be a perfect recipe for any phase of the South Beach Diet. For phase one, serve it with a salad such as Mary’s Perfect Salad or Wake Up Your Mouth Thai Cucumber Salad. For phase two or three, add something like Brown Rice with Cashews and Herbs or Curried Rice and Red Lentils.

Only three more days until I’ll be going to Blogher, the conference, not to be confused with Blogher, the website where in the Food and Drink section, the contributing editors are myself, Alanna of A Veggie Venture, Sam of Becks and Posh, and Elise of Simply Recipes. I’ve been spotlighting some of our past postings on Blogher to give you a taste for the site. One of the best things for foodies is that you can click on Food and Drink in the left sidebar, and only the food-related posts will show.
In March, Alanna writes about Ex-Pats writing food blogs while Sam spotlights a blogger who has written about 120 restaurants in Sydney, Australia. I talk about eating frogs in Asia, while another blogher writer, Mipmup, blogs about the connection between spices and health. Heading into April Sam writes about love on the food blogs, while Alanna gives chapter 1 and chapter 2 about why blogging is not a waste of time. Elise writes an info-packed post in a continuing part of her “how-to-cook” series, and I generated a bit of controversy among the BlogHer readers by reminding them that bathing suit season was coming.

We are a participant in the Amazon Services LLC Associates Program, an affiliate advertising program designed to provide a means for us to earn fees by linking to Amazon.com and affiliated sites. As an Amazon Associate, I earn from qualifying purchases.
« Previous PostHires Hamburgers: A Utah Icon.
Next Post » Weekend Herb Blogging #43 Recap. (How Do You Describe Delicious?)

10 Comments on “Recipe for Soy-Grilled Shrimp and Asian Veggies”