Happy New Year everybody! We’re back to reality after the holidays, and back to Weekend Herb Blogging. This week we have new bloggers, and fun news to share at the very end about one of our WHB regulars. I started the week thinking I might do photos for the recap now that I’m only hosting once a month. Then I remembered that one of my New Year’s Resolutions is to actually have more of a life, and not spend quite so much time on the computer! So when I’m hosting I’ll probably keep doing my tried-and-true style without photos.

There are still people who are signing up to host for several months in advance, so it looks like WHB will continue going strong in 2007. Hosting Weekend Herb Blogging is a big job, so upcoming hosts, remember photos are purely optional! If you’d like to have a chance to host, e-mail me at kalynskitchen AT comcast Dot net.

I feel compelled to comment that as I was going from blog to blog checking entries for this recap, over and over I was struck with the quality of the entries! So many of them were truly something special, not just another food blog post. It’s the wonderful effort of the participants that has kept WHB going for so long, not anything I have done, so thanks to you all. Now, back to the food!

Pune : Maharashtra : India
I need to start out with an apology to Vaishali from Happy Burp because I missed her entry for Garlic Greens Chutney when I posted Holiday Cooking with Herbs. She says has forgiven me if I promise never to do it again! I promise!

Southern California, U.S.A.
Another catch up, a culinary masterpiece from Surfindaave, the Serendipitious Chef, who sent it in December but we decided to save it for the regular WHB. When you see his recipe for Linguini with Cayenne Shrimp in Cactus Pear Sauce you’ll see why I’m sure he’ll be getting a cookbook writing offer someday!

Sydney, Australia
I hope these things don’t relly come in threes, because it seems I also need to apologize to Y from Lemonpi for earlier leaving her entriy about heirloom tomatoes out of this recap. Y shares a charming story from a time she was puzzled to have a friend serve her “just tomatoes” and information about heirloom tomatoes, one of my favorite subjects. Deepest apologies!

Denver, Colorado, U.S.A.
Sheela from Indian Spice Trail has sent a recipe for Indian Masala Seasoning that looks very interesting. Perfect for my resolution to stop using packages spice mixes and start making my own.

Southwest Virginia, U.S.A.
An inventive use of potatoes from Coffeepot of Coffee and Cornbread (next week’s host, btw.) Coffeepot (aka Sue) made Potato Skins and Red Pepper Soup. She’s using the potato pulp to thicken the soup and then serving the soup with tasty potato skins.

Vancouver, B.C., Canada
Next up is a Creamy Mushroom Chicken Pasta from Katerina at Daily Unadventures in Cooking that sounds just heavenly. I love the idea of using fresh thyme in a dish like this. (And Katerina, I could make this SBD friendly so fast it would make your head spin!)

Kronshagen, Schleswig-Holstein, Germany
It seems like Ulrike and I are old friends, now that I have finally learned how to to spell the name of her town without looking it up! (I’m frightfully bad with names!) Head over to Kuchenlatein and see the wonderful sounding Butternut Squash Risotto with Sage that Ulrike has created for WHB this week.

Washington D.C., U.S.A.
A very interesting post next from Krista of Calendula and Concrete about Mizuna, a japanese green that surprised her when it keep thriving from a pack of mixed lettuce seeds, despite the cold. Krista has information about the plant and some recipe suggestions.

Springfield, Missouri, U.S.A.
Of course I love the idea of Cornbread with Jalapenos and Cilantro which comes next from Glenna at a Fridge Full of Food. Great photo of the cornbread, and how could it miss with cilantro, my very favorite herb?

Melbourne, Australia
Haalo from Cook (almost) Anything At Least Once never disappoints, and she has a wonderfully inventive appetizer this time. I could never describe it as well as her wonderful photos illustrate it, so go see Eggplant Bites with Chermoula Sauce and Gemello Cheese.

Queens, New York, U.S.A.
I mentioned new bloggers, and here’s the first. From a lovely blog called Avenue Food, Sarah sends us a great sounding recipe for Herby Lamb Burgers with Tzatziki Sauce. Lamb, herbs, and Tzatziki sauce; what’s not to like?

San Francisco, California, U.S.A.
Another new blogger, and if you read her *about me* section you’ll see why Gluten-Free By the Bay is such an interesting blog. Isaiah (a woman) cooks delicious sounding kosher and gluten-free food, and we hope she sends lots more WHB offerings like this one: Salmon with Sage and Vegetables in Parchment Paper.

Davis, California, U.S.A.
Sher of What Did You Eat has a New Year’s Resolution to only use cilantro for 80% of the time in 2007. I’m so disappointed. Ok, that was a joke, and if you’re new to WHB you may not realize that Sher and I live to eat cilantro. The cilantro is only part of the reason Sher’s creation of Stir-Fried Bok Choi with Cilantro and Roasted Peanuts looks so yum. I like everything about this recipe.

Next a truly amazing post from Anh of Food Lover’s Journey who writes about the most mispronounced dish in the world, the Vietnamese noodle soup called Pho (pronounced fuh – Anh, correct me if I’m wrong.) Anh’s post includes all kinds of information about the origins of Pho and herbs that are good to use in it, and her recipe for Vietnamese Beef Noodles in Broth, Pho Bo, is a masterpiece. This one I have already saved in my del.icio.us cookbook!

Cambridge, Massachusetts, U.S.A.
Becky of Key Lime and Coconut says Boston is having one of the warmest Januarys in history, but that didn’t stop her from turning the heat up even more with a yummy sounding Chipotle Chicken Stew. I love Chipotle chile peppers, and this sounded just fabulous.

New Jersey, U.S.A.
Not a new blogger, but a new blog name for the talented Gattina. She has re-named her blog Kitchen Unplugged, and will be spotlighting her hand-made bread, pastry, and pasta, along with her other culinary creations. This week she has adapted a previous WHB recipe to create Grilled Chicken in Banana Leaves Indonesian Style, which sounds wonderful.

Trinidad
A new blogger, and a new location. We’ve never had a WHB participant from Trinidad before. (Do you know exactly where it is? I had to look in the Atlas to find it off the coast of Venezuela.) Trini Gourmet is featuring a tropical fruit called Five Fingers, Carambola, or Star Fruit. She’s looking for recipe ideas for this interesting fruit if anyone has any.

Valhalla, New York, U.S.A.
Another fabulous post from Rinku of Cooking in Westchester, who features both red and white onions, with several recipes as well as other information. First there’s a recipe that sounds beyond delicious for Chicken Pulao, or Rice and Chicken Casserole, then a great tip for adding something special to a salad with Wine-Vinegar soaked red onion.

Vendee, France
Amazing posts just kept coming. Next is Kate from Thyme for Cooking who writes about Coq au Vin and the Chocolate Secret. I’m not going to reveal the secret, except to say that it was so simple I wondered why I hadn’t heard of it before. Go to Thyme for Cooking to find out more.

Sydney, Australia
Another magnificent entry, this one from Anna at Morsels and Musings with two (count ’em) new ingredients in one post. Anna features the Australian icon Moreton Bay Bugs, a type of bay lobster, and an heirloom type of peaches called the Donut Peach to create a dish she names Moreton Bay Bugs with Donut Peach Salsa. And there’s coriander and lime juice too! It just doesn’t get any better than this.

Another blog with a new look, but not a new name, is Sugar Delirium, where VeuveClicquot is laying off the sugar for the new year and focusing on turnip greens. I love greens, and the recipe for VC’s New Year’s Turnip Greens sounds great, especially the idea of sprinkling on almonds or sesame seeds.

Nantes, France
Another lovely bi-lingual offering from Virginie of Absolutely Green, who’s making a very interesting and healthy-sounding salad. There are at least two new ingredients in this recipe for Mesclun with Smoked Salt and Toasted Millet and Macadamia Sauce. I’ve never heard of toasted millet flakes or smoked salt, and I’m not sure if anyone has ever used macadamia nut oil for WHB either. Virginie has the English version at the end, or click on the English translation.

Southern California, U.S.A.
It’s a double header for SurfinDaave from The Serendipitious Chef who braved cold weather at the farmers market and then stinging barbs of criticism from his family to create Stinging Nettle Frittata. How does he keep coming up with these new ingredients week after week? If you’ve never had nettles (like me) there’s a lot of information about health benefits and how to remove the stinging properties.

Trinidad, California, U.S.A.
Another incredible looking dish and an amazing post; this time it’s Saffron Holiday Bread from Christine of Christine Cooks. This post has everything including a very complex recipe with great instructions, beautiful photos, and information about saffron. Even if you’re not a bread maker, be sure to check out the photos! 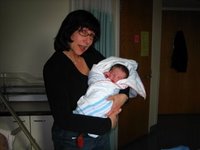 Toronto, Canada
I know I said no photos but I couldn’t help but show you why Ruth from Once Upon a Feast didn’t send a recipe this week. Ruth is holding her new grandson, which she says has been perfectly baked for nine months! Read all about the new little guy over at Ruth’s blog.

Reminders:
Voting is open for the 2006 Food Blog Awards where Kalyn’s Kitchen is a finalist for Best Food Blog – Theme. I’m truly touched by all the nice messages I’ve gotten from people wishing me well or telling me they’ve voted for me. Here are links to all the nominated sites and where to vote.

Don’t forget January 9 is the last day to send Ilva your kitchen photo link if you’re planning to show your kitchen to the world!

We are a participant in the Amazon Services LLC Associates Program, an affiliate advertising program designed to provide a means for us to earn fees by linking to Amazon.com and affiliated sites. As an Amazon Associate, I earn from qualifying purchases.
« Previous PostLow-Carb Warm Scallop Caesar Salad
Next Post » How to Make Beef Stock