It’s World Bread Day, and I’m sharing some tips for choosing bread that’s good for a low-glycemic or carb-conscious diet! Use Bread Recipes for low-glycemic or low-carb bread recipes on this site.

Today is World Bread Day, and I did bake the bread you see in the picture above. I confess I made it in my favorite Oster Bread Machine (affiliate link),  but I’m guessing some of you are surprised that I make bread at all. After all, you can’t eat bread on a carb-conscious diet can you?

Well, actually you can. But you have to learn to choose the right kind of bread, taking into consideration the ingredients, of course.

If you’re wanting bread and doing the South Beach Diet or another carb-conscious or low-glycemic diet, you should also think about what else you’ll be eating that day before you reach for the bread. It’s not overly complicated, but there are a few things to remember. This post will share a few things I’ve learned.

FLOUR IS MOST IMPORTANT

Check the label to see what type of flour is used before you buy any type of bread if you’re doing South Beach. Be sure it says “100% whole wheat” or “100% whole grain.” Be careful that it doesn’t say “wheat flour” instead of “whole wheat flour.” Other grains in addition to wheat are great if you like that type of bread. There’s also a type of flour called white whole wheat, made from a variety of wheat which is lighter in color, which is good, but not often used in commerially produced bread. I’ve heard that white whole wheat can be used just like white flour in baked goods, but haven’t really experimented with it yet.

Bread needs some sugar, honey, or molasses to make the yeast grow, but if you’re on South Beach you want to choose bread with the absolute minimum amount of sweetener. Usually bread with molasses will have the least sugar carbs, but there are some good choices that use a very small amount of honey too. Be very careful not to get bread with high fructose corn syrup, which seems to find its way into a lot of supposedly healthy products.

THINK ABOUT WHAT ELSE YOU’RE EATING

Bread isn’t permitted for phase one of South Beach, which many people consider to be the hardest part of the diet. Actually I found that when you start re-introducing higher-carb foods into your diet, after you’ve completed phase one, monitoring how many carbs you’re eating can be more challenging than avoiding them altogether. South Beach doesn’t encourage counting carbs, one thing that sold me on the diet. Instead, you monitor your carb intake by gradually adding back higher-carb foods and keeping track of whether you’re still losing weight (phase two) or maintaining your weight (phase three). If you’re eating bread that day, you may have to forego things like low-glycemic rice, low carb pasta, and higher carb veggies like sweet potatoes. Probably the best choice for either phase two or phase three of the diet is a balance of foods, with different choices every day.

Below is the ingredient and nutritional information from the bread mix and some commercial brands of bread I buy. These breads may not be available where you live, but you can learn what to look for on the label. I also eat a lot of Low-Carb Pita Bread, which I sometimes toast in the oven to make crisp pita chips. I don’t eat bread every day, so I keep it in the freezer.

This is the lowest carb count I’ve seen on bread, with only 6 net carbs per slice. (Carbs minus fiber equals net carbs.) The bread does have fructose and molasses both, but in very small amounts, since there’s less than 1 gram of sugar per slice. The slices are small and fairly thin, which obviously reduces the amount of carbs. I like this bread, but in my opinion it’s not as tasty as either of the other two brands I buy. I do like that it has three grams of fiber per slice, if that’s important to you. 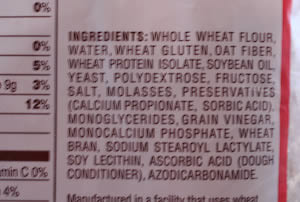 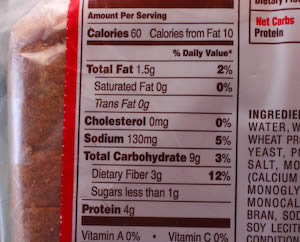 This was my favorite bread long before I ever heard of the South Beach Diet, and I’ve been eating it since college. Happily it’s made with 100% whole wheat and has moderate amounts of sweetener. The slices are slightly less than 1/2 inch, which is partly why the carb and sugar grams are less than you might think, and this is a pretty good bread to eat in moderation on South Beach or low-glycemic diets. This is my favorite bread for tomato sandwiches, one of my biggest indulgences that involve bread. 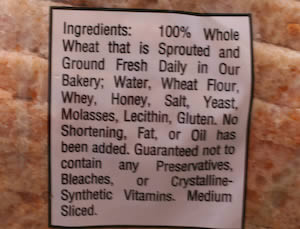 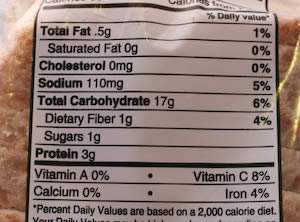 33 Comments on “Choosing the Right Bread for a Low-Glycemic Diet: World Bread Day”