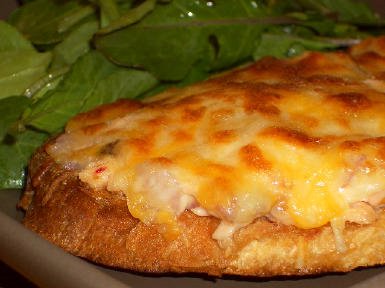 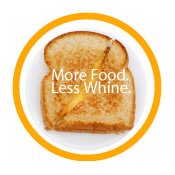 A fun blog I hadn’t seen before, Cook (almost) Anything At Least Once made cheese crackers in solidarity with the cheese sandwich eaters. Jennifer at Weekly Dish makes no excuses for writing about the Philly CHEESE Steak sandwich she had for dinner. At Tigers and Strawberries, the always eloquent Barbara had some comments that food magazine editors should be sure to read. The Fat Free Vegan went to extra lengths for her *cheese* sandwich.

Kayak Soup had a grilled cheese which was way above average. Another out-of-the-ordinary cheese sandwich was the Panini Caprese at Dispensing Happiness. A very well-written piece on the cheese sandwich furor, quoting (with permission) a number of bloggers, appeared in Paper Palate. A Few of My Favorite Things had a photo of a cheese sandwich that I wanted to just take a bite of! Not to bore you to death Mr. Wells, but Milk and Honey reported on what she had for lunch. Stephanie at The Feast Crusade breaks new ground in the food blogging world by telling us what she had for a midnight snack.

Ok, by now I am seriously losing track, but Gourmetish now has made and shared two sandwiches, first a delicious-looking Grilled Colby Jack on Rye, and then a grilled cheese on foccacia. At Culinarily Obsessed, Jaay eats her sandwich before she has a chance to photograph it, but she still dishes up some great commentary. A fun blog called 1x umruehren bitte delivers some politically neutral cheese commentary and a great looking sandwich too; the blog is written by Zorra, who is Swiss, but living in Andulucia, Spain.

A fun find sent by my friend Alanna, an actual Cheese Sandwich Blog. The writer, Stephanie, apparently didn’t know about cheese sandwich day, but I still thought this was too good not to share. Saturday morning, my sister Pam reported on our family blog that she was reading my blog and had a sudden urge to make a cheese sandwich! Cooking Vintage posted one of her favorite sandwiches from childhood, Jarlsberg on whole wheat with spinach and mustard.

Magic Tofu has been very busy all weekend with Paper Chef #15, but still managed to create a masterful sandwich at Slurp and Burp, featuring asparagus, proscuitto ham, gruyere, and a mustard flavored bechamel. Also on Saturday, Paul, who originally came up with the cheese sandwich idea, showed his version of the sandwich, Havarti and Cornish Game Hen on Rustic Sourdough. (And yes, he had it for lunch.) Jonski Blogski does a great post on Cheesy Sandwich, Grilled, then follows it up with Cheese Sandwich, Redeemed. Saltshaker joins the fun with Viva, LaCheese Sandwich, in which he reports on how he has accidentally joined the cheese sandwich movement.

ReMARKable Palate discussed Cheese Sandwich Day, along with an interview with Sephardic Cooking expert Janet Amateau, on his weekly podcast. I thought his analysis of the reaction by food bloggers was very thorough and fair. (Also, Mark, thanks for featuring Kalyn’s Kitchen in the podcast!)

On Sunday, Mrs. D. at Belly-Timber posted ‘Mighty Cheese Warriors: An Historical Vignette’ in which she visits the 2440th anniversary of Cheese Sandwich Day in the land of Gastroblogia. Don’t miss this incredible and imaginative post! All I can say is Bravo!

After the dust is starting to settle, I Was Just Really Very Hungry shares some insightful thoughts on the whole cheese sandwich saga. The Gallumphing Gourmand finds he is still thinking about cheese sandwiches and recreates a recipe from childhood. At Spittoon Extra, Andrew creates a unique sandwich with fried haloumi layered with spinach, watercress, and rocket, served in whole wheat pitta and doused with lemon rind and olive oil dressing.

Early in the next week, Ed Charles from Tomato announced a new blog event springing out of Cheese Sandwich Day : Post and EaT Everything Week End Lame Leftovers (Pete Wells). Designed to promote the recycling of leftovers, the new event is sure to help folks use leftover comments on the Blog vs. Mag topic. Paint Brush Poet published Ode to a Cheese Sammitch, the first cheese sandwich poem I’ve seen. Matt at Matt Bites created an amazing cheese sandwich magazine cover.

Even later in the week, food bloggers are still making cheese sandwiches. At One Whole Clove, Sarah Lou creates a fabulous looking Garlic Bread, Merguez Sausage and Cheddar Cheese Panini. Truly worth blogging about! The Web Sorceress Cooks also made some very tasty looking mini-cheese sandwiches, which she had for dinner! Cookbook 411 thanks Pete Wells and other bloggers who had photos of great cheese sandwiches for inspiring her to order the El Gaupo at the Honey Hole in Seattle.

By the following weekend, Vanessa of She Craves was forced to pay a visit to her doctor, where she was diagnosed with auto-Petewellesian Bloggorhea. The prescription was no more blogging, but Vanessa cured herself with a Grilled Brie Sandwich with Ginger Preserves.

By the following week, CBS News had picked up the story on their online site, and Magic Tofu was kind enough to alert me here.

(Edit – even years later people were hearing about the Cheese Sandwich controversy, and Wandering Chopsticks sends me a cheese sandwich post with a note that people really do care what she’s having for lunch!)

(I’ll be adding more whenever people let me know about them. There is no time deadline for this, cheese sandwiches taste good anytime! Please don’t feel slighted if I missed you, just send an e-mail and I’ll add you in.)

All that brings us to my last cheese sandwich, the one you saw at the beginning of this post, and an evaluation. I had been planning to go to the store on the way home Wednesday and get some cheese and bread for the last sandwich. As it turned out, I was sick that day, and Salt Lake was having a huge snowstorm to boot. On Thursday, home sick, I decided just to make the sandwich from what I had around. I toasted a piece of the Asiago Cheese bread I used for the first sandwich. I had half of a piece of grilled salmon in the fridge, so I broke that up with a fork, mixed in a couple of tablespoons of some finely diced red onion and some mayo, and spread it on the sandwich. Then I sprinkled on some grated cheddar and monterey jack cheese and put the sandwich in the toaster oven. I cooked it about 10 minutes, then turned it to broil and browned the cheese. It was delicious, and yes, Pete, I did have it for lunch.
For The Cheese Sandwich Chronicles I made more cheese sandwiches than I had for at least a year previously. But for the real life cheese sandwich controversy, I made more connections with new food bloggers, or people I had barely known about, than I had ever thought possible in such a short time. Finding out that we all like cheese sandwiches was fun, but even more fun was finding out how we all support and care about each other. I know this has not been a universally fun period for everyone. I certainly had my feelings hurt by a few comments I saw around the blogs, particularly one that said I should have just edited my blog so people wouldn’t have known it was me who was dissed by Pete Wells. But for me at least, something that started out very bad ended up to be very good. That’s the part I will remember when I think of this day.
Some people will never get it. What was so offensive about the article Pete Wells wrote was that it presumed that only certain people’s creations and efforts have validity. He appoints himself as the metacritic of the entire internet of food blogs, somehow entitled to decide which blogs are good and which are bad. And even worse, he feels that if he decides a blog is bad, he has the right to ridicule it, even though many others like that blog, and may even prefer it to some blogs he chooses as being superior.
Listen up Pete Wells, and all the rest of you in the mainstream media who think you can still tell people what to think, what to like, and what to read. We are creating our own media now, and supporting each other in doing it. People who love food are united through the internet in a way they never could have been united through cookbooks, magazines, or newspaper food articles. The incredible expressions of support I’ve received through this experience from people I never dreamed had read my humble little food blog is proof of that. The world has been changed forever by this new-found ability for people to connect at a very human level with others thousands of miles away who share the same opinions, passions, and ideas.

We will never go back.

If I’d known it might be fun to make a record of this in real time, I’d have done a better job of keeping track of when things happened, so forgive me if I’m off on the times. And if anyone wonders how I’m finding the time to record all this for food blog posterity, I’m actually home sick nursing a nasty cold, one of the perils of teaching cute but germy small children. I know I missed some people, possibly even some I knew about, so please forgive me if I did. If I missed you and you commented on or made cheese sandwiches, even after the official day has ended, send me an e-mail with your link: kalynskitchen AT comcast DOT net. I’ll add them in as quickly as I can. 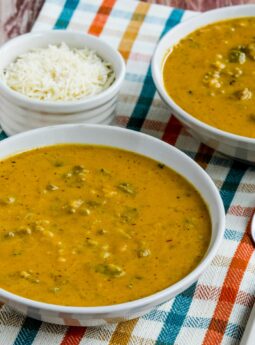 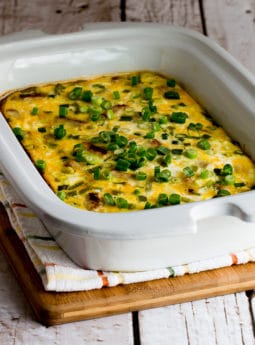 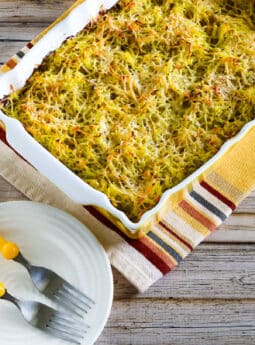 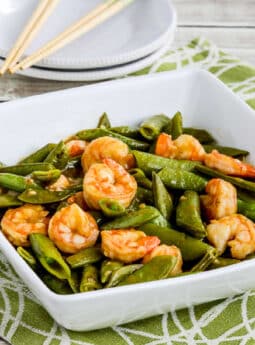 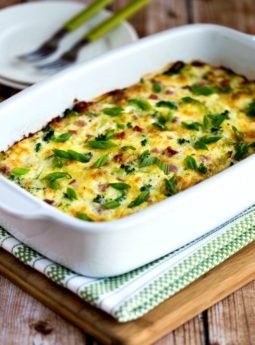